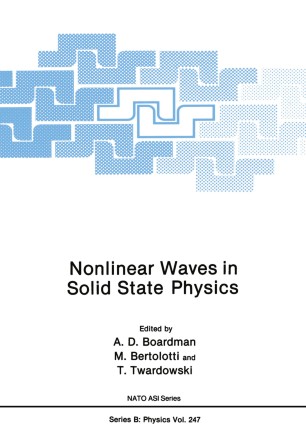 This book is based on the contributions to the 17th International School of Materials Sci­ ence and Technology, entitled Nonlinear Waves in Solid State Physics. This was held as a NATO Advanced Study Institute at the Ettore Majorana Centre in Erice, Sicily between the st th 1 and 15 July 1989, and attracted almost 100 participants from over 20 different countries. The book covers the fundamental properties of nonlinear waves in solid state materials, dealing with both theory and experiment. The aim is to emphasise the methods underpinning the important new developments in this area. The material is organised into subject areas that can broadly be classified into the following groups: the theory of nonlinear surface and guided waves in self-focusing magnetic and non-magnetic materials; nonlinear effects at in­ terfaces; nonlinear acoustoelectronic and surface acoustic waves; Lagrangian and Hamiltonian formulations of nonlinear problems; nonlinear effects in optical fibres; resonance phenomena; and nonlinear integrated optics. The chapters have been grouped together according to these classifications as closely as possible, but it should be borne in mind that although there is much overlap of ideas, each chapter is essentially independent of the others. We would like to acknowledge the sponsorship of the NATO Scientific Affairs Division, the European Physical Society, the National Science Foundation of the USA, the European Research Office, the Italian Ministry of Education, the Italian Ministry of Scientific and Technological Research, the Sicilian Regional Government and the Ugo Bordoni Foundation.