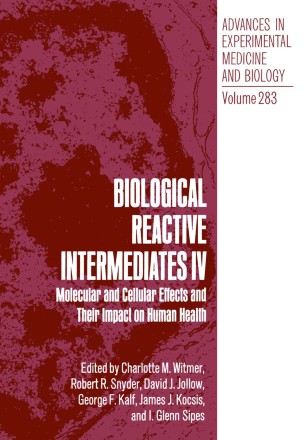 Molecular and Cellular Effects and Their Impact on Human Health

Part of the Advances in Experimental Medicine and Biology book series (AEMB, volume 283)

The finding that chemicals can be metabolically activated to yield reactive chemical species capable of covalently binding to cellular macromolecules and the concept that these reactions could initiate toxicological and carcinogenic events stimulated a meeting by a small group of toxicologists at the University of Turku, in Finland, in 1975 (Jollow et al. , 1977). The growing interest in this field of research led to subsequent symposia at the University of Surrey, in England in 1980 (Snyder et al. , 1982), and the University of Maryland in the U. S. A. in 1985 (Kocsis et al. , 1986). The Fourth International Symposium on Biological Reactive Intermediates was hosted by the Center for Toxicology at the University of Arizona and convened in Tucson, Arizona, January 14-17, 1990. Over 300 people attended. There were 60 platform presentations by invited speakers, and 96 volunteer communications in the form of posters were offered. These meetings have grown from a small group of scientists working in closely related areas to a major international series of symposia which convene every five years to review, and place in context, the latest advances in our understanding of the formation, fate and consequences of biological reactive intermediates. The Organizing Committee: Allan H. Conney, Robert Snyder (Co-chairman), and Charlotte M. Witmer (Rutgers University, Piscataway, NJ), David J. Jollow Co­ chairman) (Medical University, South Carolina, Charleston, SC), 1. Glenn Sipes (Co­ chairman) (University of Arizona, Tucson, AZ), James J. Kocsis and George F.