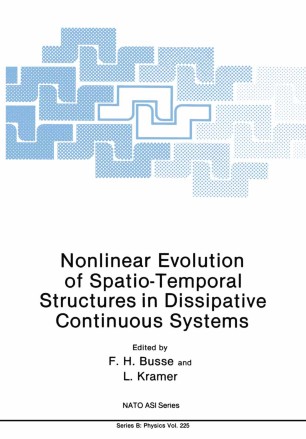 This volume contains papers contributed to the NATO Advanced Research Workshop "Nonlinear Evolution of Spatio-Temporal Structures in Dissipative Continuous Systems" held in Streitberg, Fed. Rep. Germany, Sept. 24 through 30, 1989. The purpose of the rather long title has been to focus attention on a particularly fruitful direction of research within the broad field covered by terms like Nonlinear Dynamics or Non-Equilibrium Systems. After physicists have been occupied for several decades mainly with the microscopic structure of matter, recent years have witnessed a resurgence of interest in macroscopic patterns and dynamics. Research on these latter phenomena has not been dormant, of course, since fluid dynamicists interested in the origin of turbulence, meteorologists studying weather patterns and numerous other scientists have continued to advance the understanding of the structures relevant to their disciplines. The recent progress in the dynamics of nonl inear systems wi th few degrees of freedom and the discovery of universal laws such as the Feigenbaum scaling of period-doubling cascades has given rise to new hopes for the understanding of common principles underlying the spontaneous formation of structures in extended continuous systems.