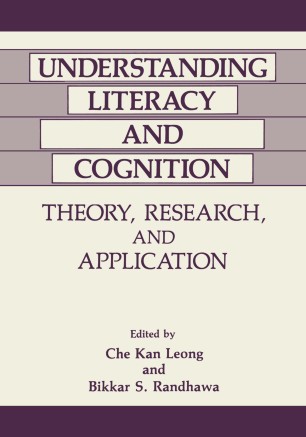 What does it me an to be literate? What does it mean to be a cognizing individual? What is the nature of cognizing? These are not new questions. They have been treated as "philosophical puzzles" to be pondered systema­ tically in the hope of some eventual solution. They have also been viewed as sets of "language games" with their own rules to enable the individual to understand the world. These age-old and significant issues gain renewed meaning with our advances in technology and neurosciences. Psychologists and educators would need to be aware of the explicit knowledge needed to prepare their students to be literate individuals. These were some of the questions that a small number of psychologists, educators, and computer scientists attempted to answer when they gathered for the Symposium Literacy and Cognition, which was held at the University of Saskatchewan, Saskatoon, Canada from 29th to 31st October, 1987. The occasion also marked the sixtieth anniversary of the College of Education of the University, which had as its beginning the Normal School for the Province of Saskatchewan. We are grateful to the presenters for their presentations and their written papers, and also to our other colleagues from the United States and Sweden for their contributions to the multi­ faceted theme of literacy and cognition. There are many other people whom we would like to thank. These include: Dr. Sylvia Fedoruk, Chancellor of the University and Lieutenant­ Governor of Saskatchewan, for her opening remarks at the Symposium; Dr.