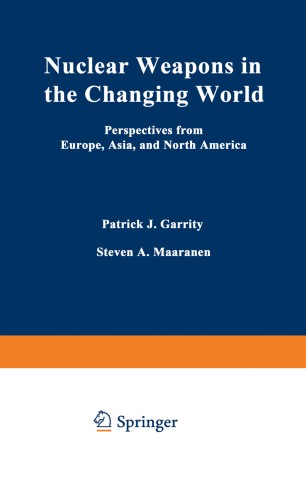 Nuclear Weapons in the Changing World

Part of the Issues in International Security book series (IIS)

Lawrence Freedman One of the major bonuses of the collapse of communism in Europe is that it may never again be necessary to enter into a sterile debate about whether it is better to be "red" or "dead." This appeared as the ultimate question in the great nuclear debate of the early 1980s. When put so starkly the answer appeared obvious­ better to live and struggle in a totalitarian system than to destroy totalitarian and democratic systems alike. There were a number of points to be made against this. Communist regimes had demonstrated the possibility of being both red and dead while the West had managed successfully to avoid the choice. If we allowed nuclear disarmament to become an overriding priority, this might encourage excessive respect for Soviet interests and a desire to avoid any sort of provocation to Moscow, a point not lost on those in Eastern Europe who were then struggling against repression and could not see why disarmament should be given a higher priority than freedom. Now that the old communist states have liberated themselves and the West no longer risks conspiring in their enslavement, there is a correspondingly re­ duced danger of mass death. As a result, and with so much else of immediate Lawrence Freedman • Department of War Studies, King's College, University of London, London WC2R 2LS, England. Nuclear Weapons in the Changing World: Perspectives from Europe, Asia, and North America.