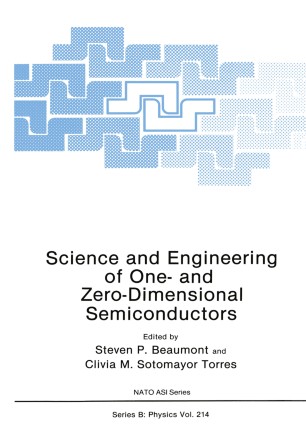 Science and Engineering of One- and Zero-Dimensional Semiconductors

This volume comprises the proceedings of the NATO Advanced Research Workshop on the Science and Engineering of 1- and O-dimensional semiconductors held at the University of Cadiz from 29th March to 1st April 1989, under the auspices of the NATO International Scientific Exchange Program. There is a wealth of scientific activity on the properties of two-dimensional semiconductors arising largely from the ease with which such structures can now be grown by precision epitaxy techniques or created by inversion at the silicon-silicon dioxide interface. Only recently, however, has there burgeoned an interest in the properties of structures in which carriers are further confined with only one or, in the extreme, zero degrees of freedom. This workshop was one of the first meetings to concentrate almost exclusively on this subject: that the attendance of some forty researchers only represented the community of researchers in the field testifies to its rapid expansion, which has arisen from the increasing availability of technologies for fabricating structures with small enough (sub - O. I/tm) dimensions. Part I of this volume is a short section on important topics in nanofabrication. It should not be assumed from the brevity of this section that there is little new to be said on this issue: rather that to have done justice to it would have diverted attention from the main purpose of the meeting which was to highlight experimental and theoretical research on the structures themselves.