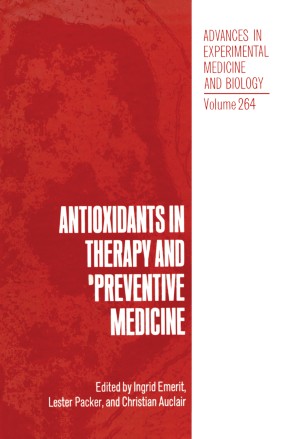 Antioxidants in Therapy and Preventive Medicine

Part of the Advances in Experimental Medicine and Biology book series (AEMB, volume 264)

Twenty years ago, the enzyme superoxide dismutase which uses the superoxide radical anion as its specific substrate was reported. With this discovery was born a new scientific field, in which oxygen, necessary for aerobi c 1 ife on thi s planet, had to be cons i dered also in terms of its toxicity and stresses. This stimulated the search for knowledge of active oxygen species in biology and medicine. Superoxide and other reactive oxygen species are now implicated in many disease processes. Major advances have been achieved during these past years with respect to free radical generation and mechanisms of free radical action in causing tissue injury. In parallel, the possibil ity of influencing free radical related disease processes by antioxidant treatment was studied in various in vitro and in vivo systems. This was the unique theme of a conference organized in Paris by the Society for Free Radical Research (December 9-10, 1988) which brought together experts from basic sciences and clinicians in order to evaluate the current status of antioxidant therapy. The conference emphasized fundamental processes in antioxidant action. Among the major topics were superoxide dismutase (SOD) and low molecular weight substances with such activity, called SOD mimics. Other antioxidant enzymes were also considered. Antioxidant vitamins, in particular vitamins E and C, other naturally occurri ng antioxidants and vari ous synthet i c antioxidants were included in the presentations as there is now a rapidly developing series of compounds with potentially interesting clinical applications.