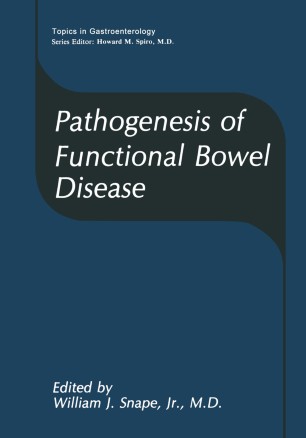 Part of the Topics in Gastroenterology book series (TGEN)

In their second year in medical school, students begin to learn about the differences between "disease" and "illness." In their studies of pathology they learn to understand disease as pertubations of molecular biological events. And we clinicians can show disease to them by our scans, lay it out even on our genetic scrolls, and sometimes even point out the errant nucleotide. Disease satisfies them and us; at Yale, lectures on the gastrointestinal tract run from achalasia to proctitis. There is, alas, little mention of functional bowel disease or of the irritable or spastic colon, for that is not easy to show on hard copy. Functional bowel disease represents "illness," the response of the person to distress, to food, to the environment, and to the existential problems of living. In real life such matters are most important. Richard Cabot first found out at the Massachusetts General Hospital almost a century ago that 50% of the patients attending the outpatient clinic had "functional" complaints. The figure had grown to over 80% when the very same question was reexamined 60 years later.