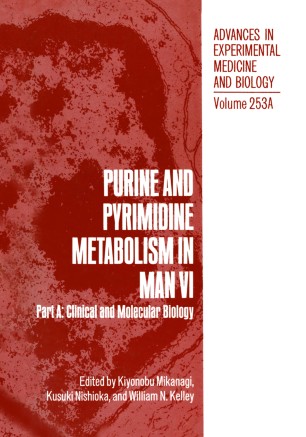 Part A: Clinical and Molecular Biology

Part of the Advances in Experimental Medicine and Biology book series (AEMB, volume 253A)

These two volumes contain articles presented at the Vlth International Symposium on Human Purine and Pyrimidine Metabolism held in Hakone, Japan ,July 17 trough 21, 1988. The first meeting of this series of symposia convened in Tel Aviv, Israel, and since then meetings have taken place every three years in various parts of the world. The second meeting was held in Baden, Austria, the third in Madrid, Spain, the fourth in Maastricht, the Netherlands, and fifth in San Diego, California. The Vlth meeting in Hakone marked the first such symposium held in Asia. On occasion of publishing these books, I would like to describe how research in this field has evolved in Japan. Early in the 1950s, I was engaged in clinical practice treating various rheumatic diseases as an orthopedicist, and found that a substantial percentage of our patients had symptoms apparently compatible with gout. During the 1960s, the number of these gouty patients increased, and in the 1970s, research on the pathogenesis of gout was performed on the basis of approximately 2,000 cases of this disease, together with precise epidemiological studies concerning gouty and hyperuricemic individuals. Data derived from the two kinds of study had greatly changed the notion that gout was a rare disease among Japanese. My clinical studies have been succeeded by research at the molecular level on various purine metabolic abnormalities, including not only gout but also other diseases with various symptoms of wide clinical spectra.