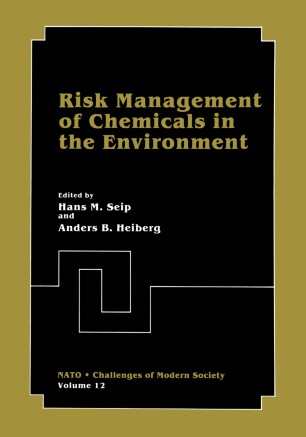 Risk Management of Chemicals in the Environment

The Council of the North Atlantic Treaty Organization (NATO) established the "Committee on the Challenges of Modern Society" (CCMS) in 1969. The CCMS was charged with developing meaningful environmental and social programmes for solving existing problems and developing long-range goals for environmental protection. In 1983, at the Fall Plenary of the CCMS, the Norwegian delegate Dr. H.C. Christensen, proposed a Pilot Study on "Risk Management of Chemicals in the Environment". A draft proposal, written by Dr. Kari Kveseth of the Center for Industrial Research in Oslo, was presented. Dr. Christensen also informed the participants at the meeting that Norway was willing to act as the Pilot Country. The project was initially planned for 3 years, but it was later extended through 1987. The inaugural meeting was held in Oslo in April 1984 with participants from Denmark, Greece, France and Italy, in addition to representatives from several Norwegian institutions. The attendees concluded that a Pilot Study, as delineated in the draft proposal, would be useful, and it was decided to work out a detailed project plan based on the proposal.