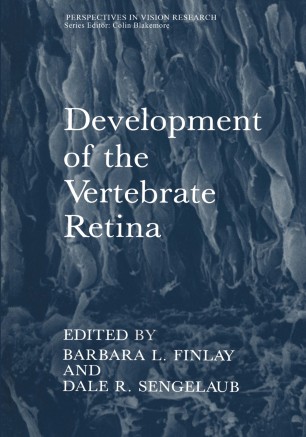 Development of the Vertebrate Retina

The vertebrate retina has a form that is closely and clearly linked to its func­ tion. Though its fundamental cellular architecture is conserved across verte­ brates, the retinas of individual species show variations that are also of clear and direct functional utility. Its accessibility, readily identifiable neuronal types, and specialized neuronal connectivity and morphology have made it a model system for researchers interested in the general questions of the genet­ ic, molecular, and developmental control of cell type and shape. Thus, the questions asked of the retina span virtually every domain of neuroscientific inquiry-molecular, genetic, developmental, behavioral, and evolutionary. Nowhere have the interactions of these levels of analysis been more apparent and borne more fruit than in the last several years of study of the develop­ ment of the vertebrate retina. Fields of investigation have a natural evolution, rdoving through periods of initial excitement, of framing of questions and controversy, to periods of synthesis and restatement of questions. The study of the development of the vertebrate retina appeared to us to have reached such a point of synthesis. Descriptive questions of how neurons are generated and deployed, and ques­ tions of mechanism about the factors that control the retinal neuron's type and distribution and the conformation of its processes have been posed, and in good part answered. Moreover, the integration of cellular accounts of development with genetic, molecular, and whole-eye and behavioral accounts has begun.