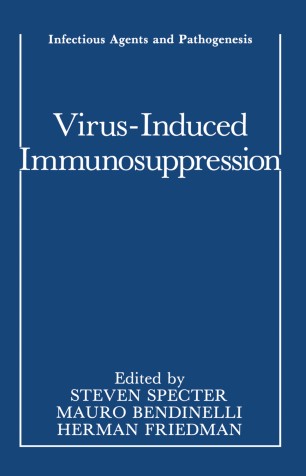 Part of the Infectious agents and pathogenesis book series (IAPA)

It is now widely acknowledged that at the beginning of this century Claude von Pirquet first pointed out that a viral disease, i. e. , measles, resulted in an anergy or depression of preexisting immune response, namely, delayed continuous hypersensitivity to PPD derived from Mycobacterium tuberculosis. Thereafter ob­ servations that viral infections may result in immunosuppression have been recorded by many clinicians and infectious disease investigators for six or seven decades. Nevertheless, despite sporadic reports that infectious diseases caused by viruses may result in either transient or prolonged immunodepression, investigation of this phenomenon languished until the mid-1960s, when it was pointed out that a number of experimental retroviral infections of mice with tumor viruses may result in marked immunosuppression. However, it was not until the recognition of the new epidemic of acquired immunodeficiency syn­ drome (AIDS) caused by the human immunodeficiency virus and related vi­ ruses that acquired immunodeficiencies associated with virus infection became general knowledge among biomedical investigators as well as the lay public. A number of reviews published during the past decade or so pointed out that numerous viruses may affect humoral and cellular immune responses. Furthermore, expanding knowledge about the nature and mechanisms of both humoral and cellular immunity and pathogenesis of viral infections has pro­ vided clinical and experimental models for investigating in depth how and why viruses of man and animals profoundly affect immune responses.