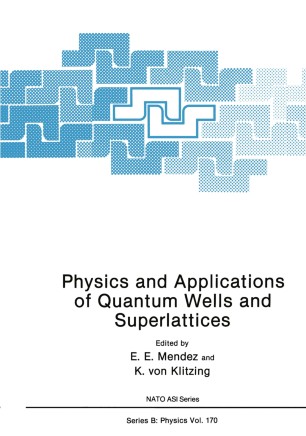 Physics and Applications of Quantum Wells and Superlattices

This book contains the lectures delivered at the NATO Advanced Study Institute on "Physics and Applications of Quantum Wells and Superlattices", held in Erice, Italy, on April 21-May 1, 1987. This course was the fourth one of the International School of Solid-State Device Research, which is under the auspices of the Ettore Majorana Center for Scientific Culture. In the last ten years, we have seen an enormous increase in re­ search in the field of Semiconductor Heterostructures, as evidenced by the large percentage of papers presented in recent international conferences on semiconductor physics. Undoubtfully, this expansion has been made possible by dramatic advances in materials preparation, mostly by molecular beam epitaxy and organometallic chemical vapor deposition. The emphasis on epitaxial growth that was prevalent at the beginning of the decade (thus, the second course of the School, held in 1983, was devoted to Molecular Beam Epitaxy and Heterostructures) has given way to a strong interest in new physical phenomena and new material structures, and to practical applications that are already emerging from them.