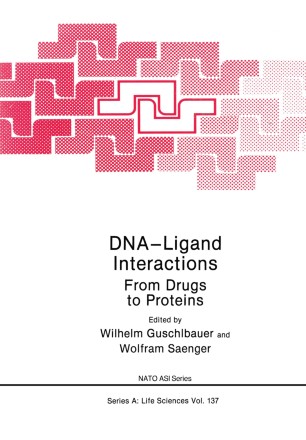 From Drugs to Proteins

This volume contains the texts of the nineteen lectures presented at the NATO-ASI - FEBS Course on "DNA - ligand interactions: from drugs to proteins." The Advanced Study Institute (ASIl was held from August 30th to September 11th. 1986 in the Abbey of Fontevraud (France). The ASI was attended by 112 participants from a wide scientific horizon and from twentyone different countries. It was in some way a follow-up of the ASI held in Maratea. Italy in May 1981 and which was published in the NATO ASI Life Science series as volume 45. While much has been learned about the way the cellular machinery maintains and transmits the genetic heritage. as well as how these processes are regulated. little is Known about how the interactions between the various partners involved are taKing place. The interactions of drugs and proteins with nucleic acids are of evident importance in the understanding of these problems. The spectacular advances in recombinant DNA technology and the increased sophistication of biophysical techniques. in particular >:-ray diffraction and nuclear magnetic resonance. have created a scientific environment which is highly promising for the future of research in molecular biology. These advances permH the serious hope that biology on the molecular level may become a r-eality. Some of the contributions at the ASI presented the most recent advances in this e>:citing field.