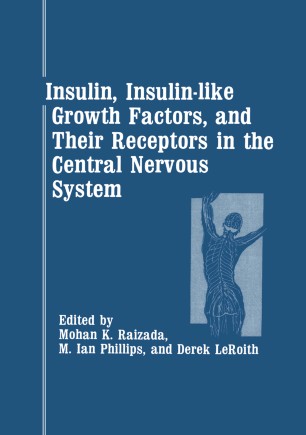 Insulin, Insulin-like Growth Factors, and Their Receptors in the Central Nervous System

Traditionally, intercellular communication and the regulation of biological functions of the body have been considered the role of two major and distinct systems: the nervous system and the endocrine system. The classic nervous system transmitted its signal rapidly by using electrical currents, whereas the signals used by the endocrine system were hormones produced by endocrine glands which reached the target tissues via the blood stream. During the past few decades, it has become apparent that these systems of intercellular com­ munication are not distinct and the signal messenger molecules are not unique to one or the other system. Many classic endocrine hormones are found in and act on nervous tissues and evidence exists for their de novo synthesis by neural­ related tissues. An exciting development in this area is the possibility that insulin and insulin-like growth factors (IGF) are not only produced by neural tissues but also exert profound physiological and biochemical effects on these tissues. The area of investigation of CNS insulin and IGF has been expanding rapidly and the availability of this book complete with up-to-date reviews on the subject by leaders in the field allows other scientists to utilize the knowledge in planning and adapting the latest ideas for future experiments. In addition, the book provides a collection of up-to-date articles for teachers to be used for the latest instructional material. The first section of the book covers general aspects of insulin receptors and insulin action.