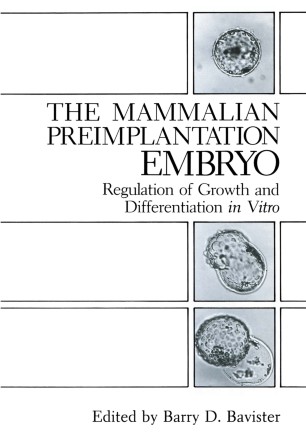 Regulation of Growth and Differentiation in Vitro

With a few notable exceptions, mammalian preimplantation embryos grown in vitro are likely to exhibit sub-optimal or retarded development. This may be manifested in different ways, depending on the species and on the stage(s) of embryonic development that are being examined. For example, bovine embryos often experience difficulty in cleaving under in vitro conditions, and usually cease development at about the 8-cell stage (Wright and Bondioli, 1981). The block to development is stage-dependent; embryos cultured for 24 hr from the I-cell stage are much more capable of developing into viable blastocysts after transfer to oviducts than embryos cultured for 24 hr from the 4-cell stage prior to transfer (Eyestone et oZ. , 1985). Similar problems with in vitro embryo development are encountered in other species. Pig embryos can be grown up to the 4-cell stage in vitro but usually no further (Davis and Day, 1978). In the golden hamster, in the rat and in many outbred strains of mice, development of zygotes in vitro is blocked at the 2-cell stage (Yanagimachi and Chang, 1964; Whittingham, 1975). Even with some inbred mouse strains, embryo development is reduced if very early cleavage stages are used as the starting point for in vitro culture (Spielmann et oZ. , 1980). A common finding is that embryos grown in vitro have reduced cell counts (Harlow and Quinn, 1982; Kane, 1985) and their viability is reduced (Bowman and McLaren, 1970; Papaioannou and Ebert, 1986) compared to equivalent developmental stages recovered from mated animals.