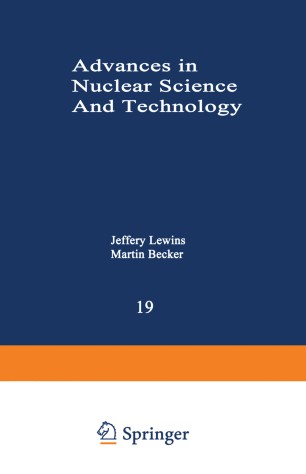 Advances in Nuclear Science and Technology

Part of the Advances in Nuclear Science and Technology book series (ANST, volume 19)

Our volume in the annual review series on this occasion represents a departure from our usual practice in that it serves as a Festschrift for Eugene Wigner. Dr. Wigner has won many honours in his long, wide ranging and distinguished career spanning so many upheavals in civilized life. The editors and the authors, indeed the whole nuclear engineering community, will wish to join in a modest but further acknowledgement of the contributions he has made to nuclear engineering, not least to the morality and professionalism of nuclear engineering in a year that has raised such international concerns over safety. It suffices to make a bald statement of Eugene Wigner's life and times here, for the first article of the volume is a loving appreciation by his long-time colleague, Alvin Weinberg, an evaluation of his contribution historically during and after the Second World War but equally an account of the philosophy which Wigner provided to the burgeoning profession. Eugene Wigner was born 17th November, 1902 in Budapest, Hungary and his early schooling is described by Dr. Weinberg.