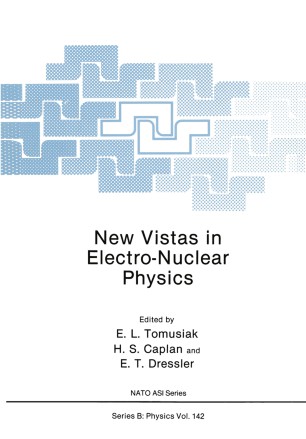 The NATO Advanced Study Institute "New Vistas in Electro-Nuclear Physics" was held in Banff, Alberta, Canada from August 22 to September 4, 1985. This volume con­ tains the lecture notes from that Institute. The idea to organize this Institute coincided with the award of funding for a pulse stretcher ring at the University of Saskatchewan's Linear Accelerator Laboratory. This together with the high level of interest in electron accelerators worldwide convinced us that it was an appropriate time to discuss the physics to be learned with such machines. In particular that physics which requires high energy and/or high duty cycle accelerators for its extraction was intended to be the focus of the Institute. Thus the scope of the lec­ tures was wide, with topics ranging from the structure of the trinucleons to quark models of nucleons, QCD, and QHD. The theme however was that we are just trying to under­ stand the nucleus and that the electromagnetic probe can serve as a powerful tool in such a quest.