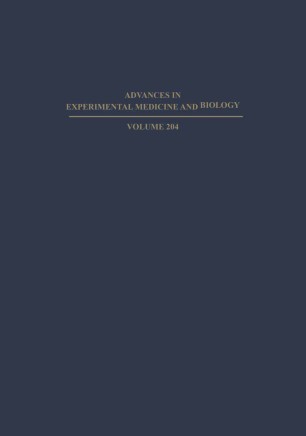 Part of the Advances in Experimental Medicine and Biology book series (AEMB, volume 204)

Our understanding of the functional mechanisms relating dopamine activity to normal and abnormal behavior has been turned "upside-down" by the recent developments described in the chapters of this volume. Heretofore, it was generally agreed that all of the pharmacological and behavioral properties ascribed to dopamine systems were mediated via activation or inhibition of the subtype of dopamine receptors termed D2. The properties of these receptors were first characterized in 1975 following their identification by receptor binding techniques utilizing 3H-butyrophenones, potent antipsychotic drugs, used in the treatment of schizophrenia. Although another subtype of dopamine receptor had already been identified a few years earlier, now termed the Dl receptor, its functional properties were unknow- other than the fact that it was associated with the activation of the enzyme adenylate cyclase. Our absence of knowledge of the behavioral functions of this receptor stemmed primarily from the lack of selective agonist and antagonists for DI receptors - drugs which did not also interact with D2 receptors. Selective agents for D2 receptors did exist and hence the behavioral roles of D2 receptors were easily ascribed. The work described in this text is primarily stimulated by the development of two selective Dl receptor drugs - the antagonist SCH 23390 and the agonist SKF 38393. The studies described herein clearly show that D1 receptors do indeed have many behavioral functions, on the surface often similar to those responses mediated by D2 receptors.