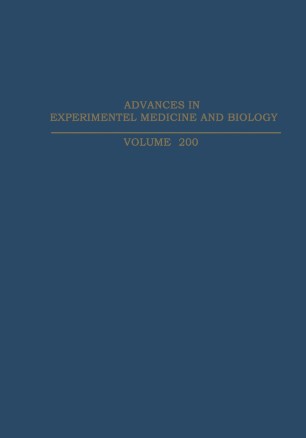 Part of the Advances in Experimental Medicine and Biology book series (AEMB, volume 200)

In this volume the policy of review by anonymous referees and minor correction by the editor has been continued, but perhaps should not be extended without an agreed policy statement by the Society. Our choice is minimal revision with rapid publication or proper review with some delay in publication. The editor wishes to express his gratitude to Ann Richardson, Joann Fish, Lance Johnson, and Philip Weinbrecht for their invaluable help in the preparation of this volume. Ian S. Longmuir v BRIEF HISTORY OF ISOTT The Society endured a long gestation period. During the 1960s its formation was discussed at a number of international meetings devoted to oxygen in biological systems. Prominent among a great number of such gatherings were those held at the Institute of Diseases of the Chest, London 1960; Bedford College, London 1963; Queen Elizabeth College, London 1963; and the Seventh Bad Oeynhausen Conference, 1967. At first, reservations were expressed about the desirability of forming a highly specialized society which might not achieve the "critical mass" necessary for its continued existence. However, the 1971 meeting in the Max Planck Institut fur Arbeitsphysiologie, Dortmund, answered these doubts, and Dr. Melvin Knisely commenced planning a very successful inaugural meeting in South Carolina. At this meeting in 1973 in Charleston and Clemson, the Society was formed with the customary remit of the promotion of scientific exchanges.