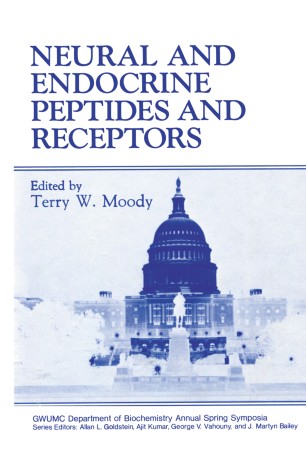 Neural and Endocrine Peptides and Receptors

The Fifth Annual Washington Spring Symposium on Health Sciences attracted over 400 scientists from 20 countries. It was held at the Lisner Auditorium of the George Washington University in Washington. D.C. The theme of the meeting was neural and endocrine peptides and receptors. The meeting emphasized basic and clinical research on neural and endocrine peptides and receptors. The six plenary sessions emphasized pituitary peptides, releasing factors, brain peptides, growth factors, peripheral peptides, and clinical applications. The chapters in this volume are derived from each of these six scientific sessions plus the poster and special sessions. The Abraham White Distinguished Scientist A ward was presented to Dr. Julius Axelrod for his numerous contributions to the field of neurochemistry. He presented the keynote address, which was entitled "The Regulation of the Release of ACTH." Dr. Axelrod discussed numerous factors, such as the peptides CRF, VIP, and somatostatin, that regulate hormone secretion from pituitary cells. The Distinguished Public Service Award was presented to Senator Lowell Weicker, Jr., in recognition of his leadership and outstanding achievements in the United States Senate and for his legislative support for biomedical research and education. In the symposium banquet address, Senator Weicker stressed the need for continued federal support of biomedical science research.