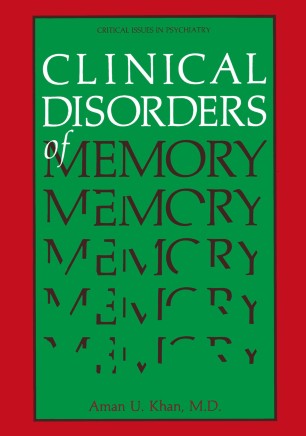 Memory is essential for the retention of learning. In the presence of memory deficits, new learning is impaired and performance of previously learned habits deteriorates. What is the nature of memory? Where does it reside in the brain? What biological events are associated with the formation and retrieval of memory? These questions are explored in the first chapter of this volume. The answers are not final, but we have learned a great deal about memory processes during the past few decades. Memory is influenced by most of the pathological processes that influ­ ence the brain such as infection, trauma, cerebrovascular disorders, and met­ abolic and degenerative diseases. The nature and course of memory impairment are unique for each of the disorders and are fairly distinguishable. More than fifty conditions are known to cause dementia, which now affects several million Americans. In Alzheimer's disease, memory disorder predominates for two to three years before other intellectual functions are affected. Many neurological diseases, such as Huntington's disease, Friedreich's ataxia, and multiple sclerosis, are associated with progressive memory deficits. Forgetting is a problem that becomes progressively worse with age. Most individuals in their forties begin to experience some difficulty in quick recall of past events. By age sixty definite changes are evident in the process of registration, storage, and recall of memory. At this age the material that is to be remembered is processed more slowly, stored less firmly, and poorly recalled.