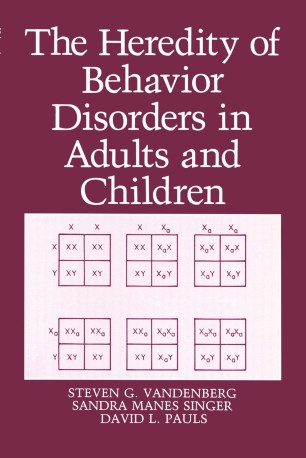 The Heredity of Behavior Disorders in Adults and Children

Current trends in morbidity suggest that by the beginning of the twen­ ty-first century, psychiatric illness may become the most pressing problem in public health in many of the advanced countries. As ably demonstrated by Vandenberg, Singer, and Pauls, the principal identifia­ ble etiology of the major psychiatric disorders is heredity; if progress is to be made in prevention and treatment of these disorders, it may have to come from improved understanding of their inheritance. A relentless increase has been observed in the frequency of mood disorders, primarily major depression but also manic-depressive ill­ ness, appearing earlier and more frequently in each age cohort born since (approximately) 1940. Because major depression is a recurrent disorder, whose episodes increase in frequency with age, the number of observed depressions can be expected to increase dramatically as these people reach middle and old age. The rate of suicide has also increased enormously, according to birth cohort. Starting with people born around 1935, the rate of suicide between 15 and 19 years of age has increased more than 10 times from the earliest to the most recent birth cohorts. What is not clear is if there will be a compensatory reduction in suicide rate as this cohort ages, because people likely to commit suicide will have done so earlier, or if this presages a general increase in suicide, comparable to the increase in mood disorders and perhaps a function of them.