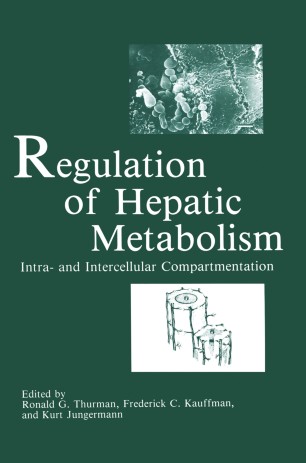 The liver is an exceptionally complex and diverse organ that functions both as an exocrine and an endocrine gland. It secretes bile, which contains many con­ stituents in addition to bile salts, and it synthesizes and releases many substances in response to the body's demands, including prohormones, albumin, clotting factors, glucose, fatty acids, and various lipoproteins. It has a dual blood supply providing a rich mixture of nutrients and other absorbed substances via the portal vein and oxygen-rich blood via the hepatic artery. This functional heterogeneity is accompanied by cellular heterogeneity. The liver contains many cell types including hepatic parachymal cells, Kiipffer cells, Ito cells, and endothelial cells. The most abundant cell type, the parenchymal cells, are biochemically and structurally heterogeneous. The cells in the oxygen-rich areas of the portal triad appear more dependent on oxidative metabolism, whereas those around the central vein (pericentral, perivenous, or centrolobular areas) are more dependent upon an anaerobic mechanism. Throughout this volume the latter three terms are used synonymously by various authors to indicate the five to eight layers of cells radiating from the central vein. Structural and metabolic heterogeneity of hepatic parenchymal cells has been demonstrated by a variety of approaches, including histochemical, ultra­ structural, and ultramicrobiochemical studies. This microheterogeneity is linked to the physiological functions of the liver and its response to injurious substances.