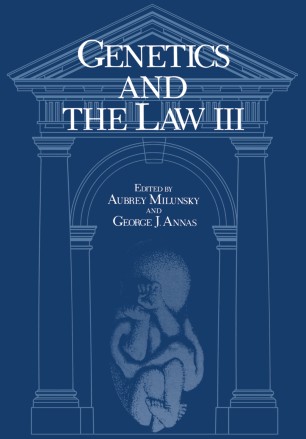 Genetics and the Law III

It was the best of times, it was the worst of times, it was the age of wisdom, it was the age of foolishness, it was the epoch of belief, it was the epoch of incredulity, ... it was the spring of hope, it was the winter of despair. . . . -Charles Dickens, A Tale of Two Cities Dickens, of course, did not have the contemporary dilemmas of modern genetics in mind. Indeed, we need to remind ourselves how short the history of modern genetics really is. Recognition that genetic traits are carried by deoxyribonucleic acid (DNA) occurred only about 40 years ago. Knowledge of the three-dimensional structure of DNA is only about 30 years old. The correct number of human chromosomes was not deter­ mined until the mid-1950s, and Down syndrome was recognized only in 1959. It was not until in 1968 that the exact location of a gene was determined on an autosomal chromo­ some, and the study of genes, rather than their protein products, has been possible for barely a decade.