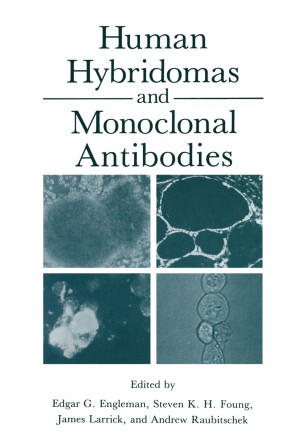 Soon after Kohler and Milstein described the use of somatic cell hybridization for the production of murine monoclonal antibodies of desired specificity, this relatively simple technique became widely applied. Indeed, production of murine monoclonal antibodies is now considered routine by immunologists and nonimmunologists alike. However, as heterologous proteins, mouse monoclonal antibodies have one major limitation: they are immunogenic in man and, hence, their use in vivo is severely limited. An obvious solution to this problem is to produce human hybridomas with the same techniques used for the production of rodent hybrids. Unfortunately, the history of human hybridomas has been marked by substantive and often exasperating tech­ nical problems, and the first reports of hybrids secreting human immu­ noglobulin of desired specificity did not appear until 1980. These reports were met with initial enthusiasm, but it soon became apparent that while human lymphocytes might be fused, their frequency, level of Ig synthesis, and stability were such that production of human antibodies with this method was neither routine nor practical. Nonetheless, a sufficient number of investiga­ tors persevered, and during the next 5 years relatively efficient B-cell fusion partners as well as improved methods of Epstein-Barr virus transformation were developed. Generation of human T -T hybrids has also been achieved, although problems of chromosomal stability remain a substantial obstacle, more so than with B-cell lines.