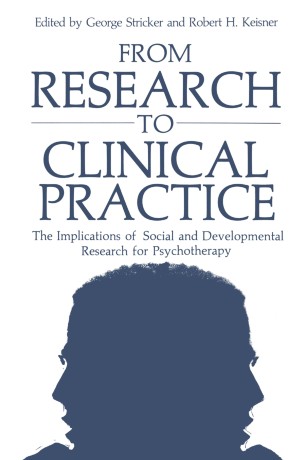 From Research to Clinical Practice

The Implications of Social and Developmental Research for Psychotherapy

It is an intriguing feature of human experience that in our present world, amid thousands of indications of the effectiveness of the scientific method, so many of us persist in demonstrably illusory or magical beliefs whether religiously related or simply reflections of long-standing superstitions. At a time when millions can observe on television the first landings of human beings on the moon, when our daily lives in the so-called devel­ oped countries are replete with conveniences that reflect scientific advances, we still persist in daily wagers on the state lotteries, in paying astrologers or palmists for their readings, in investing thousands of dollars and hours of our legislators' time in discussing such issues as the value of daily prayer in the elementary schools. The emergence of modem medicine based increasingly on scientific research in chemistry, biology, and physics has considerably reduced people's resort to sha­ mans and witch doctors within the major sectors of our own society, although it has by no means eliminated such practitioners.