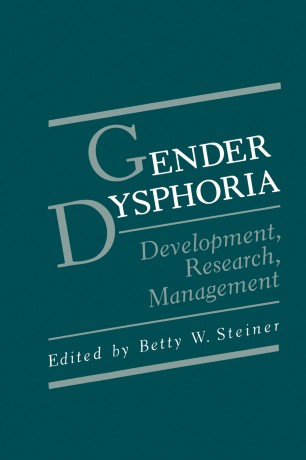 In the decade-and-a-half since I coedited Transsexualism and Sex Reassignment (Green & Money, 1969), remarkable changes have occurred with Harry Ben­ jamin's "transsexual phenomenon" (1966). Formerly, when writing about this condition in scientific journals, it was necessary to define the term transsex­ ualism. Now the lay public recognizes it. Even the American Psychiatric Asso­ ciation acknowledges it as a "disorder," with its inclusion in the Third Edition of its Diagnostic and Statistical Manual (1980). Although this "elevation" to the status of mental illness may seem a Pyrrhic victory, it is a recognition of the legitimacy of transsexual ism as a source of human suffering. The controversy that surrounded the decisions in the early patient cases to perform sex-change surgery has largely dissipated. The cries of "collusion with delusion," principally from psychoanalysts, have quieted. The dire predictions of psychosis and/or suicide following surgery as the "last psychic defenses are cut away" have almost never been realized. By contrast, many postoperative patients consider the surgery to have been life-saving. Medical centers worldwide have incorporated programs for evaluating and treating persons requesting sex reas­ signment. Elaborate guidelines for patient management have been developed by an international organization of health care professionals (Harry Benjamin Inter­ national Gender Dysphoria Association, 1981). Harry Benjamin's child has come of age.