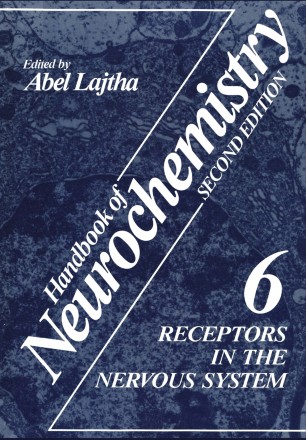 Volume 6: Receptors in the Nervous System

A major advance in the biological sciences in the past decade has been the biochemical identification of cell membrane receptors. The existence of re­ ceptor substances on the surface of cells that recognize and bind to extracellular molecules was proposed at the beginning of the century by the pharmacologist and immunologist Paul Ehrlich and the physiologist J. N. Langley. Since then, receptors have been found to play an important role in numerous physiological and pathological processes. Over the years many attempts have been made to physically isolate and chemically characterize receptors, but because of the receptors' extremely low concentration and membrane localization, these ef­ forts have met with limited success. Yet, despite the failure to characterize receptor substances, the concept of the presence of such molecules has had considerable heuristic value. Using pharmacological, physiological, and im­ munologic approaches, researchers have identified several specific receptors, e. g. , a-and ~-adrenergic, nicotinic and muscarinic cholinergic, and histami­ nergic. With the characterization of various types of receptors on cell mem­ branes, many drugs were developed that proved to be experimentally and ther­ apeutically useful. It was only in the early 1970s that methods for the specific measurement, chemical characterization, and physical isolation of cell membrane receptors were developed. These advances were made possible by the availability of ligands with high specific radioactivity that retained their biological activity and of experimental procedures that differentiated between specific and non­ specific binding of ligands.