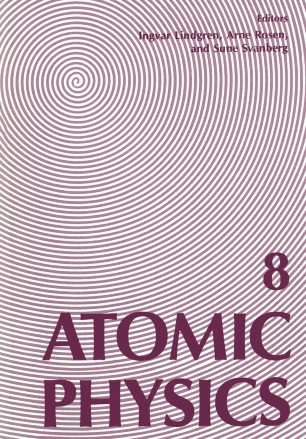 The Eighth International Conference on Atomic Physics was held at Ch~lmers University of Technology, Goteborg, Sweden on August 2-6, 1982. Following the tradition established by earlier conferences in the series, it was attended by 280 participants from 24 countries. A total of 28 invited talks were delivered at the conference. These talks, which are presented in this volume, covered a wide range of topics in atomic physics in a broad sense. They extend from very basic problems (e.g., the interpretation of quantum mechanics in light of Bell's theorem and the feasibility of relativistic many-body calculations) to applied problems (e.g., laser detection of trace elements and spectroscopy of chemisorbed molecules). Professor M.Ya. Amusia was unable to attend the conference but his invited paper is included here. Professor V.S. Letokhov presented a talk entitled "Prospects of Laser Detection of Very Rare Isotopes, but was unable to provide a manuscript. At the conference, 175 post­ ers were presented. Abstracts have been published in a separate volume. It is very much appreciated that all the 1981 Nobel laureates, Nicolaas Bloembergen, Arthur Schawlow and Kai Siegbahn, were able to attend and deliver their invited talks. Professor Schawlow summed up the conference and this too is presented here. The con­ ference also benefited considerably from the presence of Professor 1.1. Rabi, who gave a much appreciated talk at the conference dinner. As this talk was given without a manuscript, it could unfortunately not be included here.