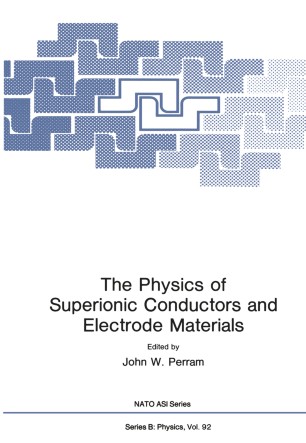 The Physics of Superionic Conductors and Electrode Materials

The following chapters present most of the lectures delivered at the NATO Advanced Studies Institute on "The Physics of Super­ ionic Conductors and Electrode Materials", held at Odense Univer­ sity's Mathematics Department between the 4th and 22nd of August, 1980. The aim of the organizing committee was to present in a rather detailed fashion the most recent advances in the computa­ tional mathematics and physics of condensed matter physics and to see how these advances could be applied to the study of ionically conducting solids. The first half of the meeting was mainly taken up with lectures. In the second week, working groups on the various aspects were set up, the students joining these groups being helped in the implementation of the lecture material. The leaders of these groups deserve special mention for the tremendous effort they put into this aspect of the meeting, particularly: Dr. Aneesur Rahman (Molecular Dynamics group) Dr. Fred Horne (Ion Transport group) Drs. Nick Quirke and David Adams (Monte Carlo methods) Dr. Heinz Schulz (Diffraction group) Dr. John Harding (Defect Calculations group) The Molecular Dynamics group achieved a certain amount of notoriety within the University by appearing to live in the terminal room.