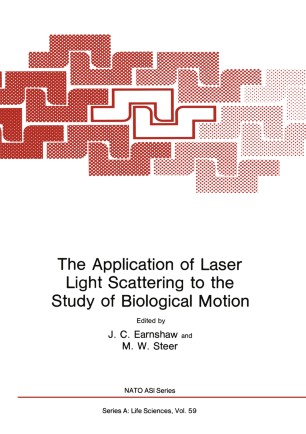 Several previous Advanced Study Institutes have concentrated on the techniques of light scattering, while the biological appli­ cations were not fully explored. Many of the techniques are now standardised and are being applied to a wide range of biologically significant problems both in vivo and in vitro. While laser light scattering methods are superior to conventional methods, there was a general reluctance among biologists to adopt them because of the complexity of the physical techniques and the accompanying mathe­ matical analysis. Consequently valuable opportunities for advancing the understanding of the biological problems were being missed. Advances in the design and commercial availability of standard light scattering instruments, and the availability of standard computer programs, made the more widespread use of these techniques a practical reality for the biologist. While biologists are unable to cope with the complexities of the physical techniques, physicists are generally unaware of the nature and scale of the biological problems. The meeting at Maratea was an attempt to bring these two groups together and provide an impetus for the application of laser light scattering techniques to biology. This volume differs from the three previous proceedings on laser light scattering in the NATO ASI series (B3, B23, B73), in that it has been published in the Life Sciences series rather than the Physics series, reflecting the shift in emphasis from the development of a new technique to its application in biology.