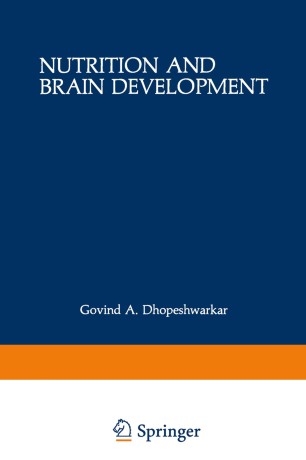 The effect of nutrition on the vital process of brain development has received increased attention in the last two decades. Using animal models, experimental research scientists have accumulated a wealth of infor­ mation and epidemiological studies of field workers have brought the animals and human studies together. Most times, there is an agreement on the results of animal and human experiences, but occasionally a voice of uncertainty is heard when results of animal studies are extrapolated to humans. After all, the human brain is far more complex than that of other species, and comparisons are not always accurate. Behavioral sci­ entists have attempted to correlate the findings of the biochemists and neurochemists to the "working" of the brain. Severe effects of malnutrition on body growth and function can usually be reversed by corrective procedures. But when such effects include the impact on brain development, the outcome can be devas­ tating. Underdevelopment of the brain caused by malnutrition during early life may not respond to corrective measures in later life. Undoubt­ edly this is a very controversial issue and the final verdict has not been reached. Unfortunately, even with today's tremendous technological innovations and applications, there are millions of people, including infants and children, who cannot obtain adequate food and are therefore exposed to damaging effects on the orderly development of the central vii PREFACE viii nervous system. Thus, this is a critical issue to many struggling popu­ lations who can ill afford such deprivation.