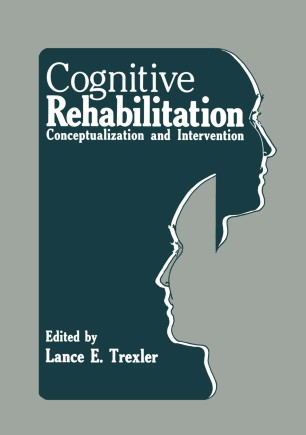 The present volume has come about through an awareness of the absence of any cohesive and substantive source on the treatment of cognitive dysfunction following brain insult. I initiated the devel­ opment of our annual symposium Models and Techniques of Cognitive Rehabilitation, on which the present volume is based, so as to educate myself, as well as others, about the state of the art in modifying cognitive processes in the brain, injured. I became aware of the need for interventive strategies for the brain, injured while a graduate student. Brain functions had, for a long time, always fascinated me, but from an academic perspective. I was confronted with the clinical consequences of brain injury while administering batteries of neuro­ psychological tests, and this experience added another dimension to my interest in brain functions. I felt grossly inadequate because I was able to rather eloquently describe changes in brain-behavior relations with neuropsychological tests, but could only generate re­ commendations based solely on the use of compensatory strategies and occasionally on some unfounded, and probably naive, remedial guess. A literature search at this time yielded devastating, little informa­ tion. The next several years were characterized by a pseudo-obsession, occurring at times without total awareness, with methods and tech­ niques which might alter impaired brain-behavior relations. Completing graduate school, however, required that these thoughts take a secondary position relative to more typical graduate student thoughts.