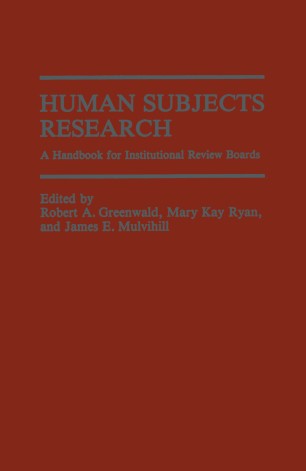 A Handbook for Institutional Review Boards

For an increasing number of hospitals and universities the institutional review board (lRB) has become a way of life. Spurred into existence by public outcries about the unethical nature of certain modern scientific experiments, the IRB represents the most visible evidence of institutional commitment to ethical review of clinical research. However, this exponential growth of IRB activities has not occurred without growing pains. Like the Environmental Protection Agency, IRBs have had to develop procedures and standards without a clear consensus as to what would be optimal for science and society. Each IRB has perforce devised its own modus operandi, subject to general principles and guidelines laid down by others but still relatively free to stipulate the details of its functioning. Thus one can applaud the general idea as well as the overall performance of IRBs without asserting that the millenium has arrived. The composition, philosophy, efficiency, responsibilities, and powers of IRBs remain topics suit­ able for debate. It is still possible (and appropriate) for IRB members to worry both about the propriety of their decisions and the personal costs of their service.