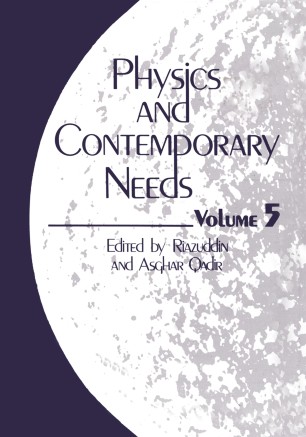 These proceedings cover the lectures delivered at the Fifth International Summer College on Physics and Contemporary Needs from June 16-July 4, 1980 at Nathiagali, one of the scenic hill resorts in the northern part of Pakistan. The college was organized by the Pakistan Atomic Energy Commission (PAEC) and co-sponsored by the International Centre for Theroetical Physics (ICTP), Trieste, Italy. It also received a financial grant from the University Grants Commission (UGC) for the participation of physicists from various universities in Pakistan. The college was attended by 22 lecturers and invited seminar speakers, 150 participants from 30 countries, and consisted of 15 concentrated days of lectures, seminars and informal discussions. These proceedings contain only some of the regular lectures delivered at Nathiagali, but the seminars heldthere are listed in the Appendix. This year the main emphasis of the college was on the fron­ tiers of physics, particularly on the recent exciting development in high-energy physics and astrophysics. However, the lectures delivered at the college also covered a large sample of other aspects of physics ranging from low"-temperature physics to plasma physics of of fusion. The series of colleges of which the present college is the fifth, an attempt to remove the barrier of isolation for the physicists working in developing countries, far removed from active centres of research. It is hoped that these colleges are helping to fill the gap in communication between the physicists of developing and advanced countries.