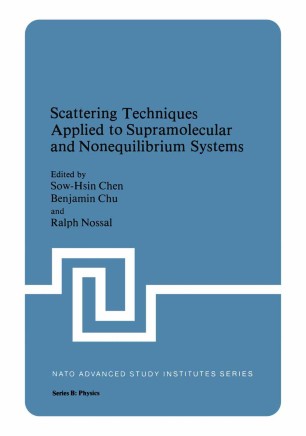 This Advanced Study Institute was held at \-lellesley College, Wellesley, MA. , from 3 to 12 August 1980. It followed by four years the second "Capri ~,chool on Photon Correlation Spectroscopy". During the intervening period there had been many new applications of dynamic light scattering techniques to the study of systems whose properties depend either on collective molecular interactions or on the formation or activity of supramo1ecu1ar structures. Con­ sequently, emphasis at this conference was on light scattering studies of subjects such as dynamical correlations in dense polymer solutions, phase transitions in gels, spinodal decomposition of binary fluids, Benard instabilities in nonequilibrium fluids, the formation of micelles and phospholipid vesicles, and movements of the molecular assemblies of muscle tissue. The instructional pro­ gramme also included tutorial lectures on two complementary spec­ troscopic techniques which have benefited from dramatic advances in instrumentation, these being small angle X-ray (SAXS) and small angle neutron (SANS) scattering. Strong cold neutron and synchro­ tron X-ray sources have become available, and data now can be acquired rapidly with newly developed position-sensitive detectors. Several reviews of recent applications of SAXS and SANS were also provided. The organizers of the ASI hoped to provide a forum for theoreticians and experimentalists to assess advances in fields which, although related, were sufficiently different that a great deal of unfamiliar information could be communicated. The order­ ing of the papers in this volume closely approximates that of the talks presented at the Advanced Study Institute.