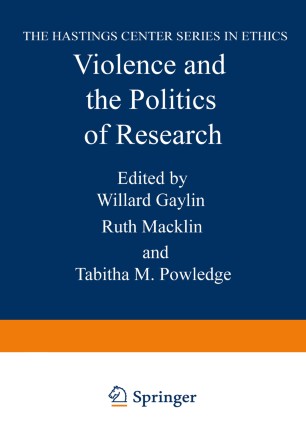 Violence and the Politics of Research

This volume is one outcome of a two-year study conducted by the Behavioral Studies Research Group of The Hastings 1 Center. It is divided into three parts to reflect the several facets of the interdisciplinary project from which it stems. In the opening chapter Willard Gaylin and Ruth Macklin, who di­ rected the study, describe its basic conception and structure, which centered around three programs to conduct research into aspects of violence and aggressive behavior, programs aborted in the early 1970s because they were politically and IThis project was supported by the EVIST Program of the National Science Foundation under Grant No. 05577-17072, and by a joint award by the National Endowment for the Humanities. Any opinions, findings, conclu­ sions, or recommendations expressed herein are those of the authors and do not necessarily reflect the views of the National Science Foundation or the National Endowment for the Humanities. Other published outcomes are the edited transcripts of two of the case-study workshops conducted under this project: "Researching Violence: Science, Politics, and Public Contro­ versy," Special Supplement, The Hastings Center Report 9 (April 1979); and "The XYY Controversy: Researching Violence and Genetics," Special Sup­ plement, The Hastings Center Report 10 (August 1980). Copies of these tran­ scripts are available for purchase from The Hastings Center, 360 Broadway, Hastings-on-Hudson, NY 10706. ix PREFACE x socially controversial.