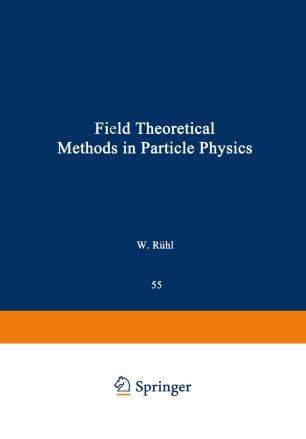 The Advanced Study Institute on Field Theoretical Methods in Particle Physics was held at the Universitat Kaiserslautern in Kaiserslautern, Germany, from August 13 to August 24, 1979. Twenty invited lectures and seminar-speakers and 100 other participants attended this Institute. The contributions of most of the lecturers and seminar-speakers are contained in this volume. The revival of field theory in elementary particle physics that started about ten years ago has influenced all branches of elementary particle physics from fundamental research to pure phenomenology. The selection of field theoretical methods in part­ icle physics appropriate for the Institute is therefore the first task for the organizers. We decided to have constructive problems of gauge field theories and solvable models as two major areas to be covered during the Institute. If one considers the concepts and terminology currently used by pure field theorists, one notices that many of them were introduced and discussed first by pheno­ menologists in comparing quite elementary models directly with experimental data. For this reason, it seemed worthwhile to re­ serve considerable time to phenomenological field theory. The Institute was sponsored by the North Atlantic Treaty Organization whose funds made the Institute possible. It was co­ sponsored by the Bundes-Ministerium fur Forschung und Technologie in Bonn and the Landes-Ministerium fUr Kultus in Mainz. The City of Kaiserslautern made the Theodor Zink Museum avail­ able for a reception. Thanks are due in particular to its director, Dr. Dunkel.