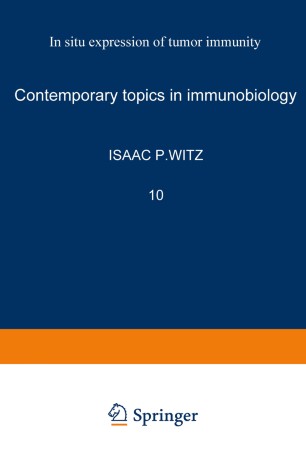 In Situ Expression of Tumor Immunity

Because of several valid (and some invalid) reasons, the research field of tumor immunology has been declining in popularity. The Simplistic dogmas, articles of faith, and theories of the late 1960s and early 1970s on the immuno­ logical mechanisms of the host-tumor interrelationships have frequently been refuted by some of the new developments in cancer biology, cancer biochem­ istry, and immunology. Furthermore, some of the conventional assays used to monitor "tumor-host immune relations" did not always reflect the host's true clinical situation or his prognosis. Several approaches to immunological interven­ tion were less successful than expected. In addition, the concept of "immune surveillance," which was basic to many researchers in the field of cancer im­ munology, seemed to fall apart. Much of the criticism was based on results from solid, well-performed, and well-controlled experiments, but there was also un­ just criticism based on ill-conceived and badly performed studies, and on misin­ terpretations of experimental data. There are many misconceptions about the tumor-host relationship. It is very often assumed that tumor immunity, as expressed systemically, is truly reflected at the tumor site. Several studies reported in this volume and elsewhere indicate that such is not always the case. Certain immune effectors may be selectively prevented from reaching the tumor site or the close vicinity of the tumor cells because of mechanical or chemical barriers, whereas others may be selectively attracted to the site by chemotaxis or other mechanisms.