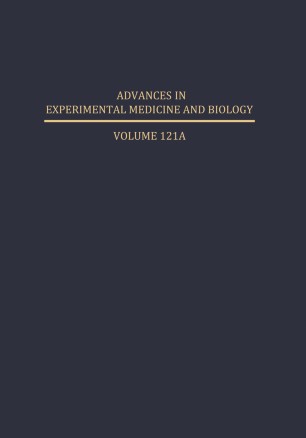 Part of the Advances in Experimental Medicine and Biology book series (AEMB, volume 121B)

The Reticuloendothelial (RE) Society, which is concerned with advd~cement of knowledge concerning the many diverse functions of RE cells, organizes national and international meetings and publishes a scientific journal. The VIII International Congress of the RE Society was held in Jerusalem, Israel, June 18-23, 1978. The Congress had as its scientific objec,tive a wide range of sub­ jects concerning the RE System, especially as related to macro­ phage function and interaction with lymphocytes. Emphasis of the Congress was placed on the nature and function of macrophages and other cells of the RE System with reference to immune responses, anti-infectious activity, tumor immunity, autoimmunity, and trans­ plant rejection. The secretion of soluble factors by rnacrophages and lymphocytes and the mode of action of these factors on other cells was stressed. During the Congress some discussion was entertained concerning the controversy as to what constitutes the "RE System" per se. Some investigators feel that the phagocytic activity of rnacrophages is the most important aspect of the RE System playing also a major role in many parameters of immunity. Mononuclear phagocytes include tissue rnacrophages as well as cir­ culating monocytes and their precursors. Although phagocytosis is a major functional activity of these cells, it is only one of several activities.