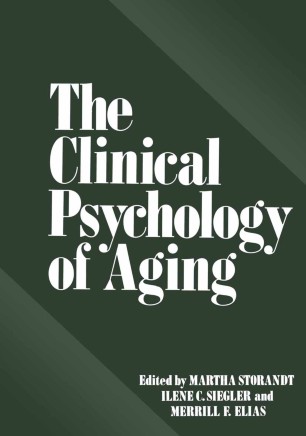 The Clinical Psychology of Aging

It has been estimated that there are at least 2,500,000 adults, 10% of the population above age 65, who are currently in need of some sort of mental health services (Kramer, Taube, and Redick, 1973). Other estimates are even higher (e. g. , Pfeiffer, 1977). It is expected that this number will increase as the number of older adults increases over the next 40 years. Probably less than 400 clinical psychologists are now provid­ ing services to this age group. The number of elderly patients actually seen by these psychologists is very, very small. One national survey found that of 353 psychologists who reported that they had older clients, only 495 individuals were seen for psycho­ logical testing and 1423 for psychotherapy in the one month just prior to the response (Dye, in press). Assuming that the same in­ dividuals were not seen for both testing and therapy within the one month period--a questionable assumption--approximately . 08% of the at least two-and-one-half million older adults in need of psychological services are now being supplied with these services in some form or another. Thus, the need for increased involvement of clinical psychology with the aged is undeniable. However, few resources currently exist which will serve to increase the number of clinical psychologists trained to meet this need. Probably less than 100 clinical psychologists living today have received any kind of formal graduate training in the clinical psychology of the aging (Storandt, 1977).