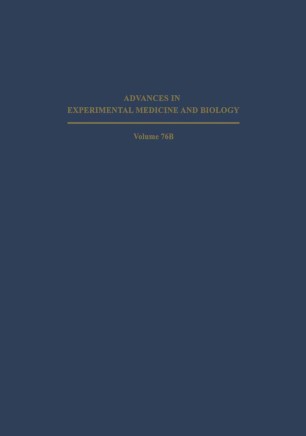 Part of the Advances in Experimental Medicine and Biology book series (AEMB, volume 76B)

The study of gouty arthritis has provided a common meeting ground for the research interests of both the basic scientist and the clinician. The interest of the chemist in gout began 1776 with the isolation of uric acid from a concretion of the urinary tract by the Swedish chemist SCHEELE. The same substance was subsequently extracted from a gouty tophus by the British chemist WOLLASTONE in 1797 and a half century later the cause of the deposits of sodium urate In such tophi was traced to a hyperuricemia in the serum of gouty patients by the British physician Alfred Baring GARROD who had also received training in the chemical laboratory and was therefore a fore-runner of many of today's clinician-investigators. The recent surge of progress in understanding of some of the causes of gout in terms of specific enzyme defects marks the entrance of the biochemist into this field of investigation. The identification of the first primary defect of purine metabolism associated with over-production of uric acid, a severe or partial deficiency of the enzyme hypoxanthine-guanine phospho­ ribosyl transferase was achieved less than a decade ago. The knowledge of the mechanism of purine over-production that it generated led shortly to the identification of families carrying a dominantly (possibly X-linked) inherited increase in the activity of the enzyme phosphoribosylpyrophosphate synthetase as a cause of purine over-production. Yet this is only a start as these two types of enzyme defects account for less than five per cent of gouty patients.