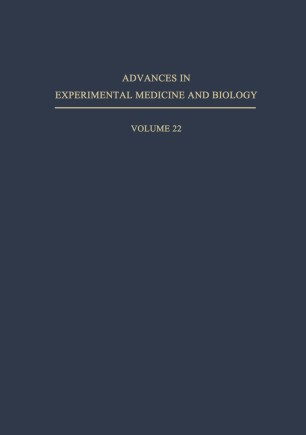 Proceedings of the Symposium on Comparative Pathophysiology of Circulatory Disturbances held at The Kroc Foundation, Santa Ynez Valley, California, November 7–9, 1971

Part of the Advances in Experimental Medicine and Biology book series (AEMB, volume 22)

The biomedical community often complains of the crowded schedule of important meetings to be attended. It was thus with some reser­ vations when the individuals participating in this conference accepted the invitation to attend a small gathering to discuss the "Comparative Pathophysiology of Circulatory Disturbances", held over three days in November, 1971. At the end of it they had changed their minds and were enthusiastic over the wisdom to hold meetingsof this kind. The conference was conceived some years earlier when it was apparent to the conveners that little opportunity exists in the common mammoth meetings to exchange detailed information and, p- haps more importantly, to transmit points of view between scientists of different disciplines. In particular, the voice of veterinarians and comparative biologists is not often heard by medical investigators, and vice versa. Thus, many animal models exist in nature whose investigative exploitation might make important contributions to an understanding of human disease, yet they are unknown to medical scientists. Conversely, veterinarians are often not aware of the needs of such models and their recognition is often delayed unduly. This conference, attended by investigators of various back­ grounds was called to help correct these deficiencies, at least in a small segment of study, that concerned with circulatory pathophysiology.