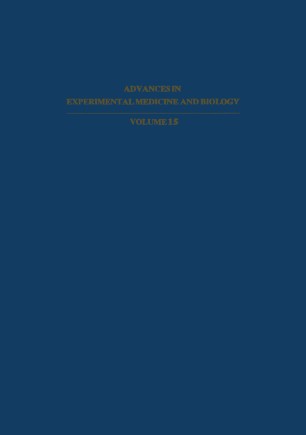 The Reticuloendothelial System and Immune Phenomena

Part of the Advances in Experimental Medicine and Biology book series (AEMB, volume 15)

This volume represents a portion of the Proceedings of the Sixth International Meeting of the Reticuloendothelial Society. There is little question that the University of Freiburg was a most appropriate choice as the site of the meeting since, in essence, the Society was founded here when Aschoff undertook his classical studies on the macrophage and discovered what may well have been the last remaining biological system. In the approximate fifty years which have elapsed since Aschoff introduced the descriptive term Reticuloendothelial System to unify those cells with the common property of phagocytosis, one finds investigative activity at the highest level in all areas of reticuloendothelial involvement. Indeed, the topics covered in the present volume would of necessity require that the common property of phagocytosis which led to the formulation of the reticuloendothelial system be modified. The common basis at the present is clearly no longer phagocytic expression, but the unifying basis of host defense. The totality of reticuloendothelial involvement in host-defense is clearly reflected by the diverse scientific backgrounds and research interests of the participants of the meeting. Remarkable advances in appreciating the involvement of the RES in maintaining the well-being of the host against a variety of endogenous and exogenous factors have been made since volume I of the Advances in Experimental Biology and Medicine on the reticulo­ endothelial system was published.