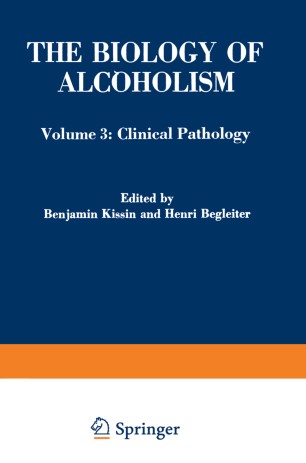 The Biology of Alcoholism

In this volume, the third of our series, the emphasis has shifted from the theoretical and experimental to the more clinical and practical aspects of alcoholism. Where, in the earlier volumes, more attention was directed to animal than human studies, in this volume, almost all material deals with the human condition. The clinical manifestations of alcoholism may be divided into two major aspects, that of the disease itself and that of its complications. This separation is to some extent artificial since, in a sense, the natural history of the disease is a function of the development of certain complicating mechanisms. These mechanisms in turn either become part and parcel of the underlying condition -alcoholism-or give rise to a new set of clinical variables characterized as "medical complications. " At this point, the dichotomy becomes real. The disease alcoholism tends to be seen as a distinct psychosocial entity and to be treated with psychosocial techniques. The "medical complications" are more clearly envisioned as being within the legitimate domain of medical practice and are treated by physicians who often tend to ignore the underlying alcoholism. The "patient" is sometimes lost in between. The major thrust of this volume is an attempt to describe the mechanisms of alcoholism as they are now known, in such a way as to establish a continuum between the disease alcoholism and its "medical complications.