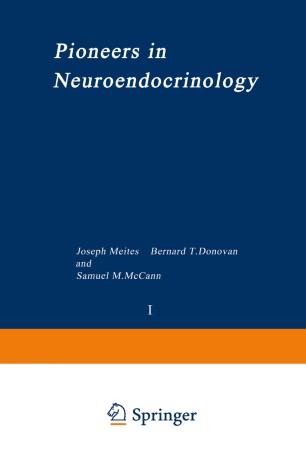 In the middle and late 1960s, when it was clear that neuroendocrinology was established as a discipline in its own right, it occurred to us that auto­ biographical accounts of the pioneer work in this field by the major par­ ticipants would provide a highly interesting and informative account of his­ tory in the making. With the death of G. W. Harris in late 1971, and the loss thereby of an outstanding pioneer and personality in neuroendocri­ nology, it appeared to us to be even more urgent to undertake such a ven­ ture and collect as many stories as possible. The three of us agreed that initially we would limit our invitations to the senior investigators whose re­ search careers lay mostly behind them, with the hope that if this venture proved successful, we could ask younger and still very active researchers in neuroendocrinology to contribute to a subsequent volume. Most of those invited to write for this book agreed to do so, but regrettably there remain some notable absentees. The authors were requested to write a personal, and even idiosyncratic, account of the steps taken, and the motivation and drive that led them to develop their interest in the relationship between the brain and the endocrine system.