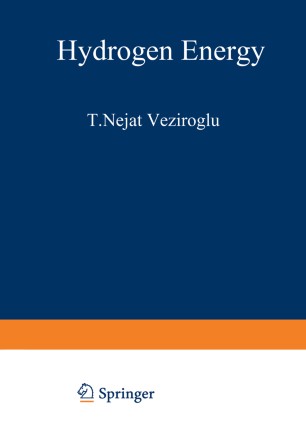 There are three important problems facing the world: deple­ tion of fossil fUels, demand for more energy, and the pollution of our environment. The world contains limited amounts of fossil fuels. They are being depleted, at an ever-growing rate. Peoples of the world are demanding more and more energy. This is due to the desires of peoples to improve their standard of living--and the standard of living is directly proportional to the energy con­ sumed. In addition, the world is demanding a cleaner environment to live in. Many of us, scientists and engineers, believe that replacing fossil fuels with the inexhaustible and clean synthetic fuel, hydrogen (produced from non-fossil primary sources of energy) will answer the above problems. Hydrogen, as the fUel of the post-fossil-fUel era, was pre­ dicted more than a hundred years ago by that great forecaster of the future, Jules Verne, in his novel The Mysterious Island: Water decomposed into its primitive elements, and decom­ posed doubtless by electricity, which will then have become a powerful and manageable force. • • . Yes, my friends, I believe that water will one day be employed as fuel, that hydrogen and oxygen, which constitute it, used singly or together, will furnish an inexhaustible source of heat and light of an intensity, of which coal is not capable •. •. I believe, then, that when the deposits of coal are exhausted, we shall heat and warm ourselves with water. Water will be the coal of the future.