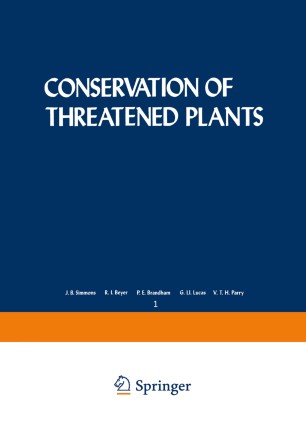 During the last hlO hundred years man has changed from living in equilibrium with the natural world which sustained him, to a new position in which he is now its undisputed ruler - and very often out of equilibrium - able in a matter of hours to reduce miles of forest to devastated, potential desert. This destructive and wasteful ability has increas~d dramatically over recent years. At the same time however the need for conservation, particularly of plants as a resource for the future, has also become apparent, along with the realisation that advanced technologies can produce more from existing agricultural and forest regions. This may to some extent relieve the heavy pressure on the vulnerable areas where short term over-exploitation leads to permanent destruction of whole ecosystems, and the attendant loss, for ever, of many of the animals and plants which originally lived there. There still remains today a vast number of plant species whose potential is unknown. Maybe they will never have more than aesthetic value to mankind. But who knows where, for example, the next anti­ cancer agent may be found. And anyway future generations may not be ready to accept such anthropocentric values, and the options should be kept open for the philosophical concept that all life on earth has a right to exist and that man has none to exterminate.