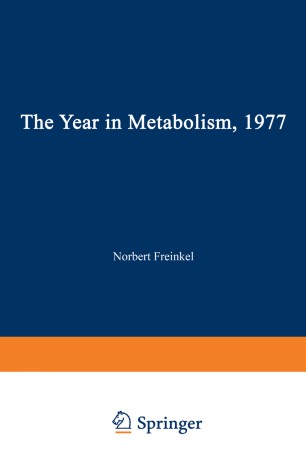 The Year in Metabolism 1977

In the words of Disraeli, "To be conscious that you are ignorant of the facts is a great step to knowledge. " For most of us, the conscious awareness of relative ignorance is an uncomfortable aspect of daily life. New data appear in such inexorable profusion that the necessity for continuous retooling has joined death and taxes as an inescapable component of our destinies. Perhaps it is this "consciousness of ignorance" that accounts for the success of the preceding volumes of this new series. The Year in Metabolism and The Year in Endocrinology series were introduced with the avowed intention of "providing an efficient and enjoyable bridge between those who are creating new knowledge at the bedside and the professional consciousness of those for whom such knowledge is ultimately intended. " That objective seems particularly appropriate at a time when the award of the 1977 Nobel Prize in Medicine or Physiology to Guillemin, Schally, and Yalow has served to emphasize the epoch-making advances that have characterized the recent course of endocrinology and me~bolism. For the 1977 volume of The Year in Metabolism, the previous formula has been preserved. The same internationally recognized authorities again have contributed commentaries about the progress in their areas of expertise. They have been joined by Drs. Jack W. Coburn, David L. Hartenbower, and Charles R. Kleeman, who have provided a new section on Divalent Ion Metabolism.